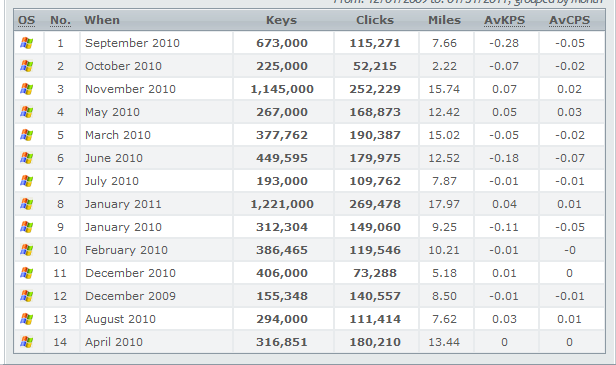 Why is it not in chronological order…?

That’s odd. It doesn’t appear that there is any logical sorting order when you do the report with ‘Group by Month’ turned on.

I noticed an another odd thing when you click on the ‘Last year’ view it sorts by week number and doesn’t factor in the year so 2011 week 5 shows up after 2010 week 50.

I don’t know how the database is set up or how the grid is generated so I’m not sure what work would need to be done to get the sort, whether that is an ORDER BY on the query or a sort after it’s pulled from the database.

I’ve gotten used to it but it would be nice to see it sorted more logically.

That’s odd. It doesn’t appear that there is any logical sorting order when you do the report with ‘Group by Month’ turned on.

Sure there is: I’d say it’s sorted alphabetically by month name in descending order

Oh man, I actually sat here for about 5 minutes trying to figure it out before thinking there was no sort order - all the months starting with A at the bottom should have been a good hint! It turns out I was mistaken

Sometimes you just need to step away for a little bit.

Oooh, I think this is definitely my favorite website bug yet! I’m not sure who is in charge of fixing stuff like this anymore though, but I think I know who to ask.