Hi, I just started using WhatPulse, and I love the heatmaps especially. I have two screens, though, and the heatmap only appears to be one. Does it just ignore the clicks made on my second screen, or does it somehow overlay them both?

Whatpulse scales your screen sizes to fit into the heatmap

So if you had 2 1920x1080 monitors, the left would be your left monitor and the right side your right monitor etc. 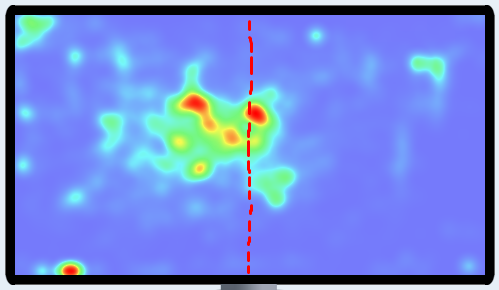 Really? Because I’m sure I’ve seen hits on the right side of the heatmap that are from the left screen, where they would line up on that screen. But those hits are from a full screen computer game, so perhaps it sees it as one screen, even though my second screen is still plugged in.

WP only recognizes the second screen if you actually use it. I did not use mine today, so the map fits exactly the first screen. Whenever you do the first click within the second screen, the heatmap shrinks both onto the graphic.

Keep in mind, games do some confusing things when it comes to mouse locations. They can define where your clicks are to the system, regardless of whether or not they actually occurred at that location.

The client records clicks on all connected screens. When displaying the heatmap, it takes the largest resolution and scales to that one. So basically it merges all screens into one. I’ll figure out how to properly display multiple screens in the client pretty soon.