Prior to installing 2.0.4 the mouse heatmap was working fine. I was having problems updating to 2.0.4 however and wound up deleting my local statistics. Now the heatmap is no longer working. It says ever since I installed WP my mouse has never moved an inch from the middle of my monitor which is a lie because I work on Photoshop and play games a lot. 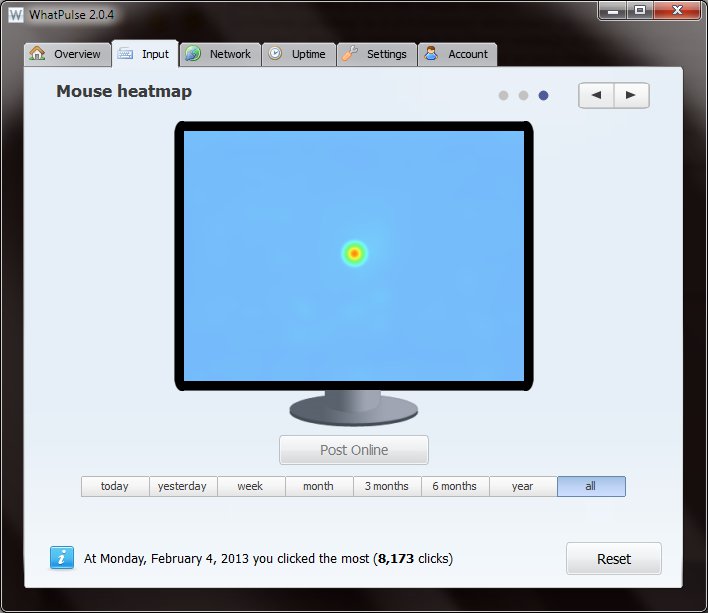 The above pic shows my mouse’s supposed position since February 3. I’ve tried reinstalling WP and luckily have it working without needing to delete my local stats again. I don’t think it would solve the problem anyway.

Another thing is that middle mouse button clicking isn’t tracked. Is this a bug? If I bind the button to simulate a keypress, that gets tracked. But if I reset it back to the system-wide acknowledged middle click, nothing happens.

Other than those two issues, 2.0.4 is working great.

Most fps’s will lock your mouse to the center of the screen, so you are actually always clicking in that one spot.

Yeah, I’m aware of that, but I don’t play FPS games. I’m playing MMORPGs and in window mode because I alt+tab a lot during downtime.

MMORPGs and pretty much any game that doesn’t have a cursor showing will lock your mouse to the center of the screen so you don’t hit the edge of the window. In a menu with a cursor showing, the mouse clicks will be recorded correctly.

That still doesn’t explain the lack of movement detected when I’m not gaming. I only play 2-3 hours a day, you know.